exa
/
ls47
Fork 0
Code Issues 0 Pull Requests 0 Releases 0 Wiki Activity
Variant of hand-computable ElsieFour cipher with 7x7 3D-printable board
You can not select more than 25 topics Topics must start with a letter or number, can include dashes ('-') and can be up to 35 characters long.
19 Commits
2 Branches
1.7MB
Branch: master
ls47-be01
master
Branches Tags
${ item.name }
Create branch ${ searchTerm }
from 'master'
${ noResults }

This is a slight improvement of the ElsieFour cipher as described by Alan Kaminsky [1]. We use 7x7 characters instead of original (barely fitting) 6x6, to be able to encrypt some structured information. We also describe a simple key-expansion algorithm, because remembering passwords is popular. Similar security considerations as with ElsieFour hold. 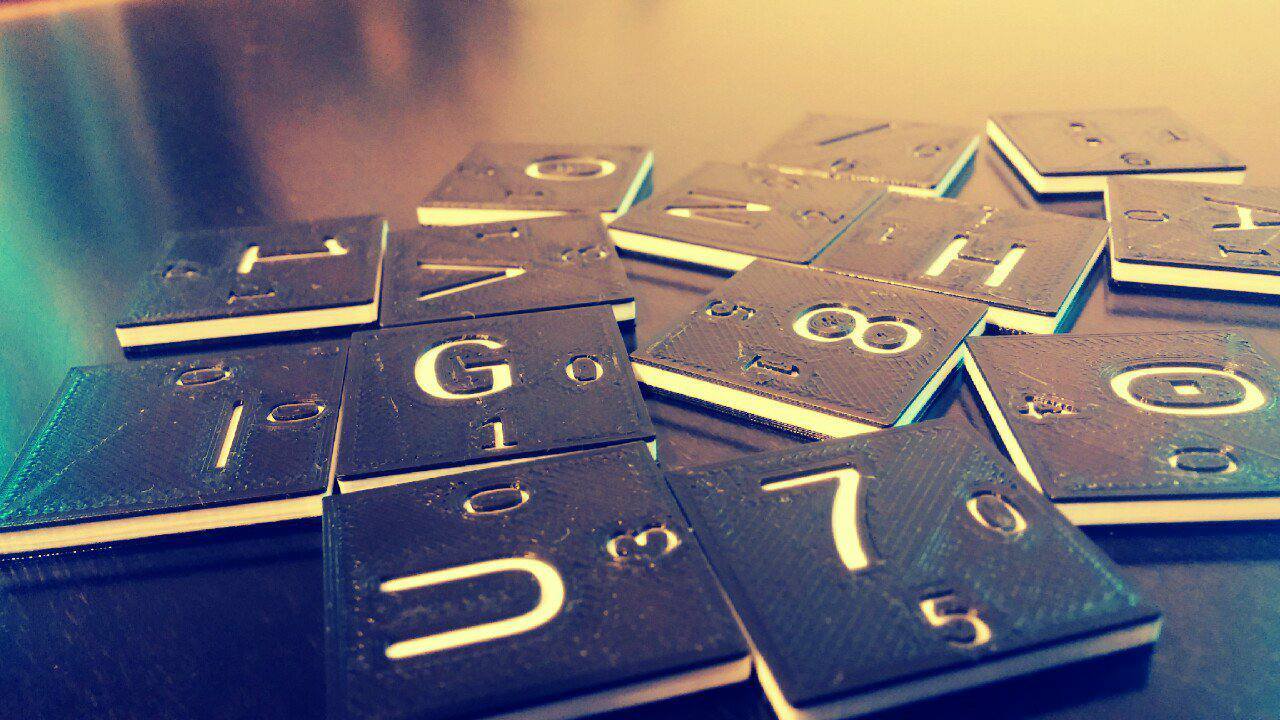 We suggest printing the model using more than one filament color to make the letters easily recognizable. Thanks go to Martin Ptasek for providing the picture.

If you trust your computer, there are several LS47 implementations around:

We have added some real punctuation, basic stuff for writing expressions, punctuation and quotes. The letters of the board now look like this:

Zoomed in, it's very practical to have extra position information written on the tiles:

To run (hand-run) the encryption/decryption, you will also need some kind of a marker (e.g. a small shiny stone, bolt nut or similar kind of well-shaped trash).

You may as well see the paper [1], there are also pictures. This is somewhat more concentrated:

Decryption procedure is basically the same, except that in step 5 you know C and M, and need to produce P by subtraction: P := C - M mod (7,7). Otherwise (except that you input ciphertext and output plaintext) everything stays the same.

Grab a bag full of tiles and randomly draw them one by one. Key is the 49-item permutation of them.

Remembering 49-position random permutation that includes weird characters is not very handy. You can instead derive the keys from an arbitrary string of sufficient length.

“Sufficient” means “provides enough entropy”. Full keys store around 208 bits of entropy. To reach that, your password should have:

Note that you can save the expanded tile board for later if you don't want to expand the passwords before each encryption/decryption.

The actual expansion can be as simple as this:

To get a different ciphertext even if the same plaintext is encrypted repeatedly; prepend it with a nonce. A nonce is a completely random sequence of letters of a pre-negotiated length (e.g. N tiles drawn randomly from a bag, adviseable value of N is at least 10).

You may also want to add a random number of spaces to the end of the ciphertext -- it prevents the enemy from seeing the difference between ciphertexts of ‘yes please’ and ‘no’, which would otherwise encrypt to gibberish that is easily distinguishable by length, like qwc3w_cs'( and +v.

Because ciphertext may be altered in the transfer or during the error-prone human processing, it is advised to append a simple “signature” to the end of the message; which may look as simple as __YourHonorableNameHere. If the signature doesn't match expectations (which happens with overwhelming probability if there was any error in the process), either try again to see if you didn't make a mistake, or discard the message and ask the sender to re-transmit.

This works because the cipher output is message-dependent: Having a wrong bit somewhere in the middle causes avalanche effect and erases any meaning from the text after several characters.